FRANKFURT—Volkswagen, which is suffering from an ongoing shortage of automotive chips, will cut working hours at its main German factory in Wolfsburg until the middle of October, it said on Wednesday. The shortened working hours affect the first two weeks of October, the company said, adding that on Oct. 1 only one assembly line would be running at the plant, located at the carmaker’s headquarters. Carmakers around the world have had to cut or adjust production in the wake of the shortage, which Volkswagen has said cost it a high six-digit number in lost vehicle production in the first half of the year. Volkswagen is due to report third-quarter results on Oct. 28.

Wed Sep 29 , 2021
BRUSSELS—European Union governments committed to a joint EU—U.S. declaration on technology cooperation on Wednesday, just in time for a key transatlantic meeting, after France threatened to block it unless it was watered down, EU diplomats said. Senior U.S. and European Union officials aim to discuss semiconductor shortages, artificial intelligence, and […] 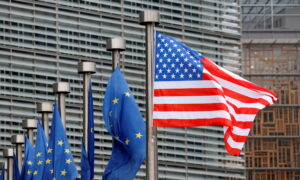