FULLERTON, Calif.—A tow truck driver with a criminal record has been sentenced to 270 days in jail for using his vehicle to steal several cars in Fullerton, according to court records obtained Sept. 29. Kevin Patrick Cannata, 36, of Anaheim, used his tow truck to steal vehicles between mid-February and March 13, police said. Cannata pleaded guilty Tuesday to one count of assault with a deadly weapon, three counts of theft with a prior conviction for car theft, one count of being a prohibited person owning ammunition, three counts of buying or receiving a stolen vehicle or equipment with a prior conviction, all felonies, as well as misdemeanor counts of receiving stolen property, possession of a controlled substance and drug paraphernalia, and vandalism. Cannata was given credit for 10 days in jail.

Thu Sep 30 , 2021
STOCKHOLM—Supply disruptions hampered H&M’s sales in September, the Swedish retailer said on Thursday, after its June-August profit surpassed expectations and pre-pandemic levels. Disruptions to the global economy during the pandemic have upset global supply chains, leading to shortages of goods as well as containers, storage and drivers for the transportation […] 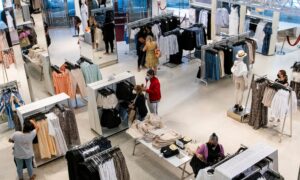