Well, you knew it would come at some point. It was just a matter of when. After Will Smith slapped Chris Rock at March’s Academy Awards ceremony—following a barb Rock made referring to Jada Pinkett-Smith’s shaved head—it was a certainty that we’d get an apology video from the Oscar-winning actor.

Friends, that day is today. On Friday morning, Smith released a video to his nearly 10-million-subscriber-strong YouTube channel, titled, ‘It’s been a minute…” (The caption? “Thanx, y’all.”) Over the course of about six minutes, Smith participates in a slightly odd, self-led Q&A session about anything and everything Slap. The first question asks why he didn’t apologize to Rock in his acceptance speech, when he won Best Actor for his role in King Richard, just shortly after the altercation. “I was fogged out by that point, Smith said. “It’s all fuzzy. I’ve reached out to Chris and the message that came back is that he’s not ready to talk, and when he is he will reach out,” said. “So I will say to you, Chris, I apologize to you.”

For what it’s worth, Rock hasn’t said much about the incident, aside from a few odd jokes during his standup tour. During a show on July 24, Rock quipped, “Anyone who says words hurt has never been punched in the face… Yeah, that shit hurt, motherfucker. But I shook that shit off and went to work the next day… I don’t go to the hospital for a paper cut.” 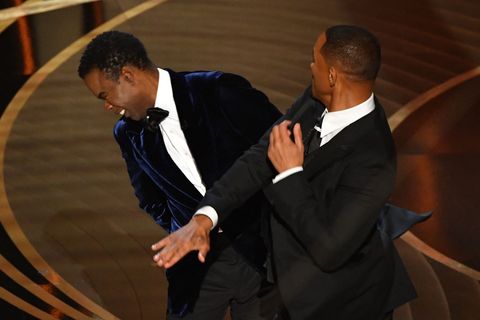 Surely you’ve seen this photo before.

Throughout the video, Smith addresses various moments from the infamous night, including whether or not Jada actually told him to yell at Rock after she rolled her eyes. “It’s like, you know, I made a choice on my own, from my own experiences, from my history with Chris,” he said, curiously somewhat amused by this question. “Jada had nothing to do with it. I’m sorry, babe. I want to say sorry to my kids and my family for the heat that I brought on all of us.” To be clear, Smith expressed extreme remorse for the altercation, adding, “I can say to all of you there is no part of me that thinks that was the right way to behave in that moment. There’s no part of me that thinks that’s the optimal way to handle a feeling of disrespect or insults.”

This is the first we’ve heard from Smith about the Oscars in roughly three months, since he resigned from The Academy of Motion Picture Arts and Sciences. On that end, addressing his peers, Smith said, “To all my fellow nominees, you know, this is a community, it’s like I won because you voted for me. And it really breaks my heart to have stolen and tarnished your moment. I can still see Questlove’s eyes. You know, it happened on Questlove’s award. And, you know, it’s like, I’m sorry really isn’t sufficient.”

At the end of it all, Smith reassures us that he’s working to make amends. “I know it was confusing, I know it was shocking, but I promise you I am deeply devoted and committed to putting light and love and joy into the world,” he says. “If you hang on, I promise we’ll be able to be friends again.” If you want to view the entire thing, go ahead and watch Smith’s full apology video below.

27 November: A look at historic events that occurred on this day

The second one day international between India and New Zealand which was scheduled to take place on Sunday...

Black Friday is the best time of year to...

Black Friday might havev passed, but the best Black...
- Advertisement -

Black Friday is the best time of year to...
Featured

Black Friday might havev passed, but the best Black...
Featured

Amazon is still offering its Black Friday deals on...
Featured