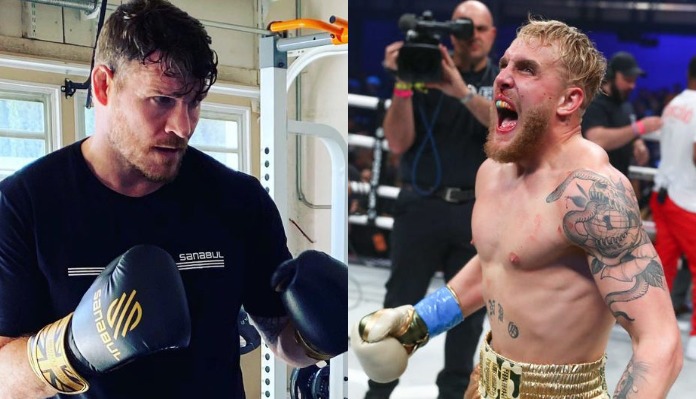 Michael Bisping has responded after finding out he has a spot on Jake Paul’s ‘hit list’.

Jake Paul has not fought since December of 2021 when he entered the ring with Tyron Woodley, where he won and improved his professional boxing record to 5-0. It seems he is ready to get back to boxing and has released his short list – six names to be exact, one of which he would like to match up with for his next high-profile bout.

In speaking on ‘The Fight with Teddy Atlas’, Jake Paul provided his short list or ‘hitlist’ of who he wants to meet in the boxing ring next:

“There’s a lot of people on the hitlist and some other names that we’re talking to, so just trying to pick the biggest opponent.”

“I’m looking for someone who can match my star power.”

In response to the call-out from ‘The Problem Child’, Bisping took to Twitter to respond, tweeting:

😂😂😂 come on @jakepaul you do know I’m about your size? Surely that excludes me from your “hit list” pic.twitter.com/S9OGPCe920

“Come on @jakepaul you do know I’m about your size? Surely that excludes me from your ‘hit list’?

Former UFC middleweight champion Michael Bisping, 43, retired from the sport back in 2018 and has since had success as a UFC commentator, analyst for BT Sport and host of his podcast ‘Believe You Me’.

Would you like to see ‘The Count’ box Jake Paul? Or, is there another name on his hitlist that you’d like to see Jake Paul match-up with next?

Share
Facebook
Twitter
Pinterest
VK
WhatsApp
Previous articleCorey Anderson explains how advice from Daniel Cormier changed his career: “It lifted a big burden off my back”
Next articleChael Sonnen urges Aljamain Sterling to learn from his latest win over Petr Yan: “Do not do that kind of math again”
- Advertisement -