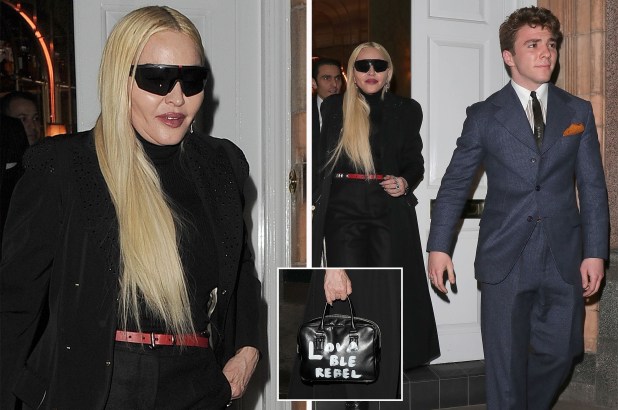 Madonna was photographed out and about, sans Instagram filters, with son Rocco Ritchie Saturday night.
BACKGRID

The singer was photographed out and about with son Rocco Ritchie Saturday night, in rare pics sans Instagram filters.

The “Material Girl” singer completed the look with a long black coat, studded boots, tights and a red belt around her waist, along with a Commes des Garcons “Lovable Rebel” bag.

Madonna has been posting plenty of risqué photos via social media as of late, with many of her followers calling her out over speculation that they’ve been heavily edited.

Rapper 50 Cent even weighed in, mocking her for a recent lingerie photo shoot.

“yo this is the funniest s—t LOL,” the “In da Club” rapper, 46, wrote on his Instagram Story. “That’s Madonna under the bed trying to do like a virgin at 63. She shot out, if she don’t get her old ass up.”

The “Like A Virgin” hitmaker quickly clapped back, accusing him of “pretending” to be her “friend.”

“Now you have decided to talk smack about me. I guess your new career is getting attention by trying to humiliate others on social media. The least elevated choice you could make as an artist and an adult,” she wrote.

Nelly also attempted to publicly shame Madonna for a recent photo, which showed her wearing fishnet tights and an embroidered jacket.

“Some things should be covered up,” the “Lil Bit” rapper, 47, commented on her post.

Fans were quick to criticize the musician, however, accusing him of being “hypocritical.”

“If a writer of songs like ‘shake ya tailfeather’ and ‘it’s getting hot in here so take off all your clothes’ gets triggered by Madonna’s ass photoshoot, just know dude, we’re laughing at your hypocritical BS,” one of Madonna’s followers replied. “Don’t sing about girls getting naked, then criticize it.”