J. Prince calls for hip-hop’s major artists to boycott the Grammy awards and instead host an epic concert to compete with its broadcast. The power move would prove hip-hop’s power after decades of disrespect. Here are five of the most disrespectful Grammy hip-hop moments. 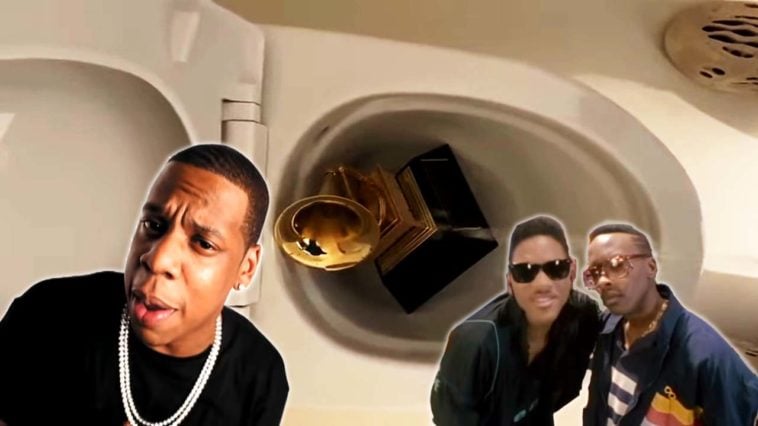 On Wednesday, March 22, hip-hop heavyweight J. Prince released via Instagram a 4-minute video titled “Hip Hop Vs. The Grammys” in which he denounced the famed music award show.   J. Prince called some of the biggest names in Hip Hop, including Kanye West, Nicki Minaj, and Drake and asked them to unite in a boycott of the 64th Grammys on April 3rd.

J. Prince was triggered by the Grammys latest attack on Hip-Hop culture when the music organization canceled Kanye West’s performance at the award show.  The DONDA rapper, fashion and music icon had previously been issued a ban by Instagram over his rants about his ex-wife, Kim Kardashian and a shot he took at the host of the Grammys this year, Trevor Noah.

J. Prince accused the Grammys of a “slave master punish a nigga mentality” that also discriminated against Drake, The Weekend and Nicki Minaj.  He said that the only way to demand respect is “by us uniting our powers to bring about change moving forward.”

J. Prince recommended that the best and most effective method to combat the Grammy’s “racist” mentality is to hold a concert at the exact same time as the annual music event.  This, the Houston icon said, would show the power of hip hop culture and drive down the Grammys ratings, thus proving that without the genre of hip hop the Grammys are a non-factor in pop culture.

In the video, “Hip Hop Vs. The Grammys”, J. Prince makes sure he informs the hip-hop community of the past offenses of the Grammys to prove that the latest ordeal is no isolated incident. In the beginning of the video Prince states, “I’ve been watching the Grammys control and dictate our culture to their benefit up close and personal for the last 30 years that I’ve been in the music business.” J.Prince draws comparisons and origins of racism in the music industry and even cites the 13th amendment of the United States Constitution.

“The powers that be will be mad at me about this one, but f**k em! I love the culture. The seed has been planted. Let’s water it,” he said.

After J. Prince’s call to the entire hip hop community for a boycott of the Grammys this year, Nicki Minaj responded immediately, replying in the comment section with supporting emojis.

The latest artist to join J. Prince’s boycott is Quavo of the Migos. He was asked by TMZ if he would be down with join the movement and replied, “Let’s do it!” Quavo then went on to say, “We need to make our own awards … that appreciate the real s**t going on in the streets. We need new younger guys, who are tapped into the culture, you gotta be in the field, to know what’s real.”

The history of the Grammys disrespect of the culture is long and various starting from Hip-Hop’s first Grammys appearance with Jazzy Jeff and The Fresh Prince through today.

The first hip hop category at the Grammys debuted in 1989 with Best Rap performance category. The award was not televised resulting in major hip hop acts to boycott the award show, including Salt-n-Pepa, DJ Jazzy Jeff & The Fresh Prince, Public Enemy, and LL COOL J.

Jay-Z talked about the 1999 Grammy’s protest with Lebron James on HBO’s The Shop. Jay was asked about DMX’s legacy when he told the story about not attending the Grammys in 1999 in protest because of a blatant DMX snub. He states on the episode, “The first time I boycotted the Grammys was for [DMX]. We both came out that year, and he didn’t get nominated. He dropped two albums, two number one albums in the same year, and they didn’t even nominate him! I won that year, for Best Rap Album. So my first Grammy win I wasn’t there. I wasn’t in the building because I boycotted it for him.”

Kanye West has been very vocal about his displeasure with the Grammys. In 2016, he took to Twitter to state that the Grammays was losing relevancy by not acknowledging the diversity in hip-hop. Kanye stated “We need to see Young Thug at the Grammys. Not just me and Jay in a suit.” He then made a plea to Neil Portnow, the president of the National Academy of Recording Arts and Sciences (NARAS), saying  “Neil please reach out as soon as possible so we can make the Grammys culturally relevant again.”

Drake and The Weeknd both have had ordeals with the Grammys directly in recent years. In 2020 Drake took to Instagram to express that award shows may not be relevant anymore saying, “I think we should stop allowing ourselves to be shocked by the disconnect between impactful music and these awards and just accept that what once was the highest form of recognition may no longer matter to the artists that exist now and the ones that come after. It’s like a relative you keep expecting to fix up but they just can’t change their ways. The other day I said @theweekend was a lock for either album or song of the year along with countless other reasonable assumptions and it just never goes that way. This is a great time for somebody to start something new that we can build up over time and pass on to the generations to come.”

Lil Wayne expressed his frustration with how the Grammys makes him question himself as an artist. In 2020, Weezy stated, “When I see da Grammys coming up & I’m not involved nor invited; I wonder. Is it me , my musik, or just another technicality? I look around w respect & wonder competitively am I not worthy?! Then I look around & see 5 Grammys looking back at me & I go to the studio.”