In Hulu’s new queer rom-com “Crush,” actress Isabella Ferreira got the chance to fulfill a dream of hers from when she was young: playing the popular girl in school.

“I’ve always wanted to play the popular girl just because I never saw a lot of Latinas playing that when I was younger,” Ferreira told TheWrap in a recent interview about the original film, which is now streaming on Hulu. “That was always one of my dreams, [and] I was able to finally do it thankfully.”

“Crush” also stars Rowan Blanchard as Paige Evans, who has had a crush on Ferreira’s character Gaby since they were much younger. Paige isn’t necessarily as popular as Gaby, but an opportunity for the two to get to know each other more arises when Paige joins the track team, which Gaby co-captains with her twin sister AJ.

“Bella has such a warm, soft, gentle nature,” director Sammi Cohen told TheWrap. “She’s just so kind and so sweet. And that’s very evident in her character. And as we kind of talked about who she was, I think it was important that she never felt mean and it wasn’t natural to lean into like, you can be an “it” girl and you can be sweet. I that’s what made her so likable. It is a little bit different than most things I see. It’s not to say one’s better. It’s just different. There’s no mean-spirited person in the movie.” 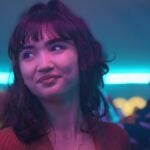 Paige’s hope in joining track doesn’t exactly pan out, because when she suggests that someone great and talented at track show her the ropes, Coach Murray (Aasif Mandvi) pairs her with AJ (Auli’i Cravalho) instead of Gaby. Through their training sessions and other social events, Paige and AJ soon realize they have feelings for each other.

“The biggest character change was an evolution of the Gabby character,” said co-writer Kirsten King. “It’s so much easier to write that stereotypical mean girl that’s clearly not right for someone, but we really wanted to strike this balance of ‘she is the right person for someone just maybe not Paige, and Isabella is so sweet and wonderful and brought such a great amount of nuance to that character.”

TheWrap spoke more in depth with Ferreira — who also stars in the Hulu series “Love, Victor” — about getting into character, future projects and more. You can read our full conversation below.

Did you relate to Gabby? Or did you kind of have to work to find your connection to her?

Isabella Ferreira: I think there was always a little side of Gabby in me. I grew up as a dancer and a lot of my favorite type of dance was jazz, and you have to have a lot of sass for that. So I think I just channeled my inner jazz dancer. 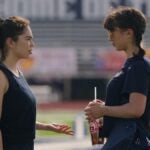 How would you compare this role to your role in “Love, Victor”?

They’re extreme opposites. Pilar loves to be on her own. She’s very dark. She’s very grungy. She’s very feisty. Meanwhile, Gaby is very light and she loves to be the center of attention. And, you know, she’s, she’s sweet and she’s kind to everybody. She wants everyone to like her. So I mean, they’re two complete opposites.

That’s a tough one. I think I really love Paige and AJ’s love story, without spoiling anything too much. But I would love to see Gabby find her own love story for sure. I think she, at the end of the day, just wants to be truly loved. But I don’t know. I mean, I guess we’ll see. Maybe there’ll be like a sequel and something else happens.

How did it feel to portray the close but also tense at times bond between twins, especially in the scene after the away track meet in which Gaby and AJ talk about things they’ve kept from each other?

Flming that scene was, as crazy as it is, incredibly easy to film. Auli’i is absolutely fantastic, and I feel like we just kind of read each other really well. I have sisters of my own. So we’ve definitely gotten into fights like that so it was definitely easy to kind of get into that mindset. But I think that was just kind of a turning point for Gabby because she’s just realized that she wasn’t as self aware as she probably thought, and she really had to put herself in her sister’s shoes. And I think that was just a breaking point and their relationship.

Did you have to train for the track and field scenes?

Luckily, we didn’t have any extreme, extreme track scenes. We were out on the track a lot. We did have to learn certain things in order to make sure that we didn’t get hurt. I personally did train a little bit before coming on to the film. I started running a lot more jogging and and just walking in general before that. I just did not do those things, so I had to build up my stamina. And thankfully I did because it was hot outside and we had to get these things done. So it was all fun in the end.

Did you have a favorite outfit that Gaby wore or what part of her fashion did you most identify with?

The fruit earrings was just my favorite touch of all, I mean with every outfit she has a different fruit on and I thought it was just hilarious, but also so cute and quirky. My favorite outfit in the film was probably the party scene. She had this cute blue orange yellow top with some nice jeans and she had this gold chain belt and huge grape earrings and it was just so cute and definitely one of my favorite outfits in the film.

Going into future projects, what would you say you will take from this experience in playing this character?

What I took from Gabby the most is probably just learning how to be more confident in myself and kind of doing things for myself as opposed to thinking about what others are thinking about me, because at the end of the day, you’re going to get the attention of whoever anytime. But at the end of the day you only have yourself. So I think just learning how to be a little bit more confident in myself and probably areas about myself that I may not have been so confident in before.”

What do you hope people get out of this film? 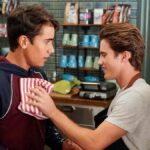