BERLIN—Three young children in Germany spent days alone at home with their dead father’s body after he died suddenly, German media reported Tuesday. The dpa news agency quoted police in the southern state of Bavaria as saying an aunt discovered the girls, ages 2, 3 and 4, on Sept. 17. Local newspaper Passauer Neue Press reported that their 35-year-old father, a single parent, had died about three days earlier of a suspected heart attack. The eldest girl gave her sisters food and drinks, the newspaper reported. When the aunt turned up, the girls told her they thought their father was sleeping.

Tue Sep 28 , 2021
BERLIN—Tesla, well-versed in German bureaucracy as it tries to build a huge factory near Berlin, is seeking a waiver from COVID-19 rules on mass gatherings to host up to 9,000 people at a “Giga-Fest” to showcase its plans. The electric vehicle maker, which began construction in the town of Grunheide […] 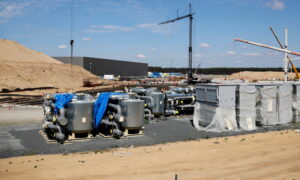