50 Cent has announced an alliance with rapper Coi Leray, stating he’ll be giving her a spot on one of his TV shows. The move is seen as a direct hit against Benzino, with whom he has been in a weeks-long back-and-forth social media war. 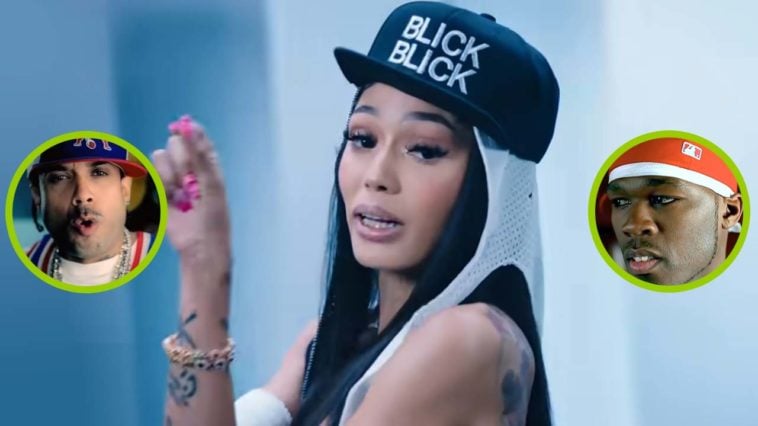 What looked like a kind offer by 50 Cent to put Coi Leray in one of his TV shows is also a subtle chess move to pit a daughter against her father. 50 has said he would put Benzino’s daughter, Coi Leray, in one of his upcoming TV shows.  Her eager response to join 50 is a direct slap against her biological father and 50 Cent’s newest foil, Benzino.

50 took to Instagram to post what looked to be a supportive message of Coi Leray.  Appearing in his common role as defender of celebrities under attack, 50 posted a picture and encouraging message about the “Trendsetter” rapper, who become a victim of internet trolling when fans learned that she allegedly only sold 11 thousand album copies in her first week. The “Power” executive producer stepped in, letting social media know to stop hating on Coi.

“Now would be a good time to stop hating on  @coileray I’m gonna make her show up on your Tv😆🛑STOP worrying about a first week WORK. GLG🚦GreenLightGang #bransoncognac #lecheminduroi.”

The 50 Cent co-sign was immediately followed up by a reply from Coi who eagerly said “Let’s Goooooo!”

The move by 50 now aligns Benzino’s own daughter with his nemesis.

Benzino just took his ongoing beef with 50 Cent to a new level. He posted a video of himself on Instagram with a representative from Celebrity Boxing, challenging his rival to a boxing match to settle the beef once and for all.

Benzino and his daughter Coi Leray do not have the best relationship and recently got into a dispute. This dispute led to Coi airing out Zino’s business on social media for the world to see.